It passed without fanfare, and barely a mention (if any) on the network news today: The United States Postal Service turned 240 years old. The Post Office (later renamed the “U.S. Postal Service”) was officially established at the Continental Congress in Philadelphia on July 26th, 1775. As you may already know, Benjamin Franklin was named the first Postmaster General, holding that position until the Declaration of Independence was signed almost a year later. That makes the Post Office older than the United States itself.

In recent years, the Post Office has been reviled by conservatives (with an agenda, of course) as one of the premier poster children of Big Government bureaucratic waste. They point to what they call the USPS’ financial “crisis” — often (mis)reported in the media: in fiscal year 2014, the agency reported a net loss of $5.5 billion.

Critics — and the media itself — are quick to offer drastic (and predictable) solutions: massive layoffs and service cutbacks. Conservatives also gleefully (and inaccurately) point out the “waste” of all those “bloated” union salaries (and health care and pensions) paid by the post office to its employees. And Post Office employees have long been the target of national derision; the “lazy” postal worker has become a societal caricature (and let’s not forget the phrase that has found its way into our colloquial lexicon, “going postal”).

First, let’s take the heat off of the postal employees themselves. No one is getting rich there, even with union contracts. USPS mail carriers average just over $51,000 a year, or an hourly wage of $24.71. Most mail carriers — 80% — earn between $19.46 and $27.27 per hour, with reported annual salaries ranging from just over $40,000 to just under $57,000. And when they retire, most of those workers can expect the princely annual pension income of about $15,000, plus whatever they get in Social Security. And that’s WITH union contracts. I shudder to think what these workers would get paid without the protections of collective bargaining.

So in other words, Mitt Romney can relax — there will be no run on any of his country clubs by cash-engorged postal workers anytime soon.

WHAT’S REALLY BEHIND THE “CRISIS”?

Now let’s get down to USPS’ finances. Since the passing of the Postal Accountability and Enhancement Act of 2006 (which I’ll explain in a moment), the USPS has reported a net loss of nearly $50 billion. And again, critics are quick to point the finger of blame at — along with those “bloated” union salaries — what they call the USPS’ inefficient and outmoded business model, thanks to the rise of the use of email and electronic bill paying.

While those factors may have contributed, nearly all of the USPS’ losses can be traced back to that single artificial accounting restriction forced onto it by the Republican-led Congress in 2006: the Postal Accountability and Enhancement Act of 2006 (PAEA) – passed and signed quietly by President Bush just days before Christmas, when virtually no one was looking. The PAEA forces the USPS to prefund its future health care benefit payments to retirees for the next 75 years in an unprecedented ten-year time span. In other words, the Post Office is being forced to put aside billions of dollars to pay for the health and pension benefits not only of employees it hasn’t hired yet, but employees who haven’t even been BORN yet.

This is something that no other government or private corporation is, or has ever been, required to do.

This is akin to the government forcing a five-year-old child to pre-fund his entire retirement package — a retirement that would begin at age 65 and last until his ultimate death at the ripe old age of 140 — mandating he sock away at least $4 million before his 15th birthday.

If not for the 2006 PAEA, and if the USPS were allowed to operate just like any other government or private corporation, it would actually consistently show a nearly $200 million PROFIT annually.

In fact, a recent report by the Postmaster Inspector General says that taking those insane health and pension prefunding requirements out of the equation, the USPS has earned a total of $1.7 billion in cumulative operating income since fiscal 2006. The IG states: “This notable, yet rarely mentioned, financial performance is surprising given the period 2006-2014 encompasses the Great Recession of 2008, the post-recession economic slump, and the continued electronic diversion of First-Class Mail.”

What was the reason for the 2006 PAEA? FOLLOW THE MONEY. This toxic Act was sponsored by conservatives who have long cried out for “privatizing” the post office and busting its unions. Who would benefit from this move? Follow the money. UPS. Federal Express. DHL. Who would suffer? Everybody else. Have you ever tried to send a birthday card, a letter, or your phone bill via FedEx for 49 cents?  (Or for that matter, have you tried to do ANYTHING at FedEx for 49 cents??)  You’d get laughed out of the office. And let’s not forget the disastrous blow the closing of post offices would have on those Americans at the lower end of the socioeconomic spectrum, many of whom, disenfranchised by banks, conduct all their financial transactions with postal money orders (not to mention those who prefer using money orders just to avoid a paper trail). The ramifications would be society-wide, striking at the heart of every community in America.

According to one postal executive, it would be hard for even the biggest private company to profit by serving rural areas of the United States; closing unprofitable rural offices would undermine the original equality-minded mission of the Postal Service to keep the country connected through the mail and to enable efficient communication to the most remote corners of the nation. 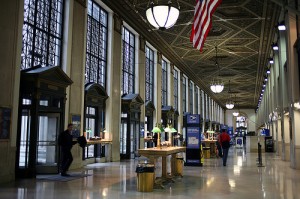 So why is this not reported in the media? Well, given the fact that it just took me ten paragraphs to explain it myself, don’t expect this kind of detail in a 12-second news story on “Good Morning America” (which also prefers to focus only on “happy” news, anyway). Also, most journalists themselves don’t know all the details.

In the meantime, at long last, let’s get to that Top Ten list!

Here are the Top Ten Things You Need to Know about the United States Postal Service (from USPS.com):

10. The Smithsonian Institution’s National Postal Museum is dedicated to the preservation, study and presentation of postal history and philately. The Museum, located in Washington, DC, was created by an agreement between the Smithsonian Institution and the United States Postal Service in 1990 and opened to the public in 1993. In 2013, the William H. Gross Stamp Gallery — the world’s largest gallery dedicated to philately — opened its doors. The gallery provides an experience available nowhere else and offers something for everyone, from casual visitors to experienced collectors.

9. The phrase by Herodotus etched atop the James A. Farley Building in Manhattan — “Neither snow nor rain nor heat nor gloom of night stays these couriers from the swift completion of their appointed rounds” — is not the official Postal Service motto. The Postal Service does not have a motto.

8. The Postal Service is environmentally-friendly and is a respected sustainability leader. It promoted sustainable practices long before doing so was encouraged, mandated or governed.

7. The Postal Service is the only organization in the country that has the resources, network infrastructure and logistical capability to deliver to every residential and business address in the nation.

4. Mail is a great communication tool. No monthly plans. No signal outages. No roaming charges. Regardless of geographic location, anyone can send a letter for just 49¢ to anywhere in the United States, its territories and U.S. military and diplomatic installations worldwide. And no worries about hacking!

3. Mail is reliable, trusted and secure — more than 200 federal laws protect the sanctity of the U.S. Mail. These laws are enforced by the U.S. Postal Inspection Service. U.S. Postal Inspectors are federal agents, mandated to safeguard the nation’s mail — including the people who move it and the customers who use it.

2. The Postal Service continues to improve customer service by increasing access to postal services online, on smart-phones and in the places people visit every day: grocery stores, drug stores, ATMs and local retailers.

1. The Postal Service receives NO tax dollars for operating expenses and relies on the sale of postage, products and services to fund its operations.

Why not give your mailman (or woman, of course) a hug today?

« return to the blog