A new “Twiplomacy” study just released today by PR giant Burson-Marsteller (yes, my competition) finds that almost two-thirds of world leaders now have a Twitter account.  The company says 16 of the so-called “Group of 20” leaders actively use Twitter for public diplomacy.  Who’s not using it:  China, Saudi Arabia, Indonesia, and Italy.

What the study doesn’t say, however, is how many of them personally use that Twitter account.  As I mentioned in yesterday’s post, who Tweets for you is often even more important than what you’re Tweeting.

Some interesting figures from the Burson-Marsteller release include:

Unfortunately, the study found that many of these world leaders who are tech-savvy enough to use Twitter are breaking a cardinal rule of media relations:  they aren’t bothering to follow each other.  Media relations and organizational communications are a two-way street; the old axiom of two ears/one mouth certainly applies: you need to listen twice as much as you say.

For more on the survey: www.twiplomacy.com. 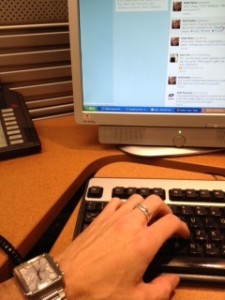 Now that the dust is beginning to settle in Aurora, Colorado, let’s talk about the danger of (a) auto-Tweeting (or any kind of auto-posting to social media), and (b) the importance of being aware of what’s going on in the world before you post your message.

It was posted at 9:20 AM EDT.  Worse, it wasn’t taken down until around 12:30 PM EDT, a full twelve hours after the carnage in began to unfold.  By 9:00 AM the entire world was shocked and horrified by the massacre (with the obvious exception, of course, of that NRA Tweeter).  This is tantamount to someone asking a friend at quarter to noon on September 11, 2001: “Hey, what are you doing for lunch?  Let’s treat ourselves to a nice meal at Windows on the World!”

There had been some initial speculation that the NRA had scheduled the Tweet to auto-publish (in fact, as they say, “there’s an app for that” called Hootsuite, which lets web publishers schedule tweets to post automatically at a preordained date and time).  However, it turns out the Tweet was manually posted by someone who was unaware of the shooting.  Someone who apparently hadn’t turned on the radio or television, hadn’t visited any major web news portals like Yahoo!, or indeed hadn’t had contact with any sentient human beings that morning.

The NRA clearly dropped the media relations ball on Friday in more than one aspect.  But first, three important lessons are the takeaway from this one unfortunate Tweet:

But the damage wasn’t limited for the NRA to its unfortunately-timed Tweet.  Even after it knew about the Colorado massacre (or at least whoever had the presence of mind to retract that Tweet), the website remained unchanged, with smiling faces at gun shows adorning its home page.  The NRA missed a golden opportunity to soften its controversial message.  The classy thing to do (without compromising its message) would have been to take down the entire website for 24 hours, replaced with a simple message like “The NRA grieves the loss of life in Aurora, Colorado, and extends its deepest sympathies to the victims and their families.”

Short and sweet.  It may even have won over a few converts, particularly after the Tweet gaffe.  Opportunity missed.